Presenting the Wuling product line with a turbo engine and various interesting activities for visitors. “We present the World of Turbo theme in order to get closer to consumers and provide the opportunity to see firsthand and feel a different driving sensation with a variety of Wuling products with turbo engines. Visitors are also given the convenience of owning our products through various special promos and don’t miss them,” Fariz Adinata Ramadhani, Sales Area Manager of the Jabodetabek 3 Wuling Motors Area.

Wuling displayed three products equipped with turbo engines in this event, one of which was the Almaz RS. The Digital Intelligent Car, which was launched in March, is powered by a 1,500 cc turbocharged engine that produces a maximum power of 140 HP and 250 Nm of torque. This SUV relies on a CVT transmission which makes gearshifts smooth and responsive. Almaz RS is equipped with the leading technology in its class, namely the Internet of Vehicle (IoV) and Advanced Driver Assistance System (ADAS) which are incorporated in the Wuling Interconnected Smart Ecosystem (WISE) as well as the first advanced Indonesian voice command, Wuling Indonesian Command (WIND). 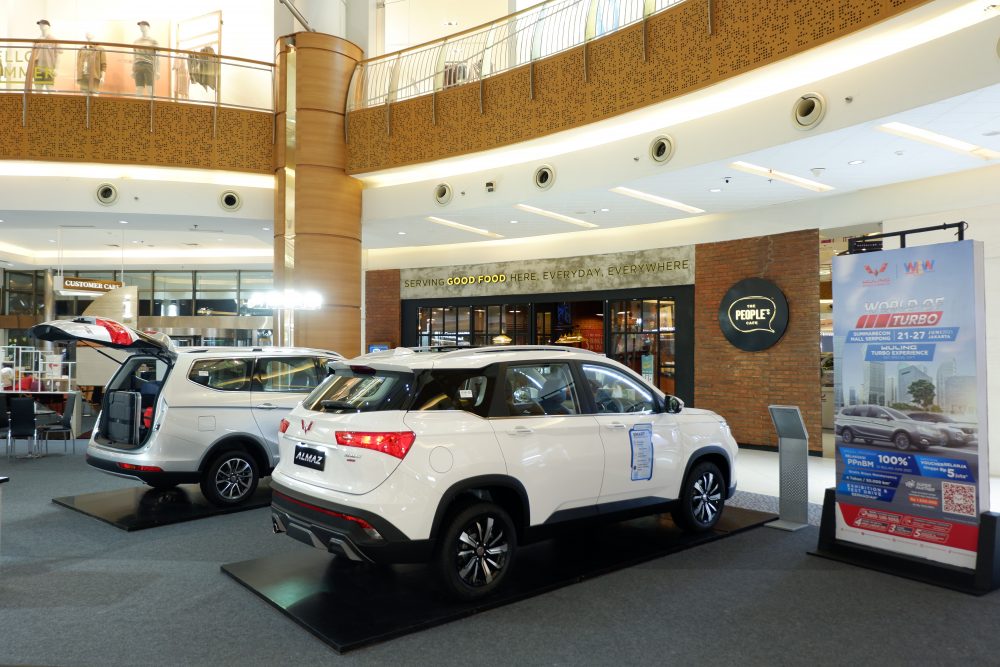 Wuling also presented Almaz, Wuling’s First SUV is powered by a turbo engine and combined with a choice of CVT transmission and a 6-speed manual. This Smart Technology SUV is also equipped with WIND to support the ease of operation of various driving features. Regarding modern features, Almaz is accommodated with a panoramic sunroof, start-stop button, 360o Camera, as well as complete safety and security features in its class.

Moreover, the Cortez CT series was also featured at the World of Turbo event. The product that carries the tagline ‘The New Advanced MPV’ has a gasoline engine configured with a 4 cylinder capacity of 1,500cc turbo with a choice of CVT and 6-speed manual transmissions as well as various latest driving features, namely a classy electric sunroof, advanced 8” Entertainment system with navigation, keyless entry, start-stop button to complete safety features. This car also offers classy comfort with spacious cabin space up to the third row and 7-seater captain seat.

Various attractive promos are also available for consumers, ranging from free periodic maintenance fees for 4 years/50,000 kilometers (whichever comes first). Also, consumers who make transactions during the event will get shopping vouchers worth up to IDR 5,000,000. Visitors also have the opportunity to take part in the Wuling Turbo Experience to get shopping vouchers of up to IDR 100,000. Specifically for purchases through Wuling Finance, there are programs in the form of Low Down Payment and Free Insurance or 0% Interest. With terms and conditions applied.

As additional information, the Wuling Experience Weekend ‘World of Turbo’ was held until 8pm following the local government PPKM regulations. Visitors could also feel safe when they were in the activity area as health protocols were always applied during this event.

Wuling Motors was officially established in Indonesia in July 2017. The long-term commitment of the company was shown through the inauguration of the factory and Supplier Park covering an area of 60 hectares in Cikarang, West Java. The first product from Wuling Motors, the Confero series, which was launched in August 2017, has received the ICOTY 2017 award in the small MPV category, ICOTY 2018 in the Best Value for Money category by Mobilmotor Magazine, and the AUTOMOTIVE AWARD 2018 version of the Rookie Of The Year. February 2018 won the title of Best Medium MPV at ICOTY 2018 by Mobilmotor Magazine, and Best Total Cost Ownership Medium MPV at the 2019 Gridoto Award. Cortez CT also won the title of Best Medium MPV at the 2019 and 2020 Gridoto Award and Best of Medium MPV Gasoline version AUTOMOTIVE AWARD 2019 and 2020. Wuling Motors also presents its first Light Commercial Vehicle (LCV) product through Formo which was introduced in November 2018. Wuling’s fourth product, Smart Technology SUV, Almaz, was launched in February 2019 and has won various awards. Starting from the 2019 Innovation Appreciation in the Technology category by Koran Sindo and Sindonews.com, 2019 Carvaganza Editors’ Choice Award, 2019 FORWOT Car Of The Year, Car of The Year and Best Medium SUV version of the 2019 Gridoto Award, the first award in Indonesia from TRAS N CO Indonesia and INFOBRAND.ID, as well as an award in the category ‘The Best Innovation in Marketing’ from the 2020 Marketing Awards. Wuling Almaz RS, which holds the intelligent digital car concept, has also received the title Car Of The Year 2021 and Best of High SUV Gasoline from Tabloid Otomotif. Wuling Motors is committed to continuing to deliver products and services that suit the needs of the Indonesian people.

Road Traffic Signs and Rules in The New Norma Era